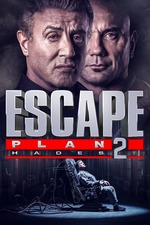 Welcome to hell. In order to properly contextualize just how painful it is to sit through “Escape Plan 2: Hades,” here is a comprehensive list of the movie’s virtues:

There’s a scene where Dave Bautista solves a Rubik’s Cube and then physically threatens Fall Out Boy bassist Pete Wentz.

At one point, Bautista walks by a marquee for Idina Menzel while wearing an outfit that can only be described as “Pitbull cos-play.”

The film immediately cuts away the moment that Stallone begins to creep on one of his employees.

That employee is played by Jaime King, an actress who continues to make everything she’s in at least a little bit better.

Titus Welliver shows up as an ultra-serious bad guy who insists that his victims call him “The Zookeeper.”

And that’s it. A direct-to-video sequel to a 2013 action movie that you probably didn’t see (its meager domestic box office was offset by huge international returns), “Hades” might boast some decent star power, but there isn’t a celebrity in the world who could save this bargain bin nonsense from feeling like a bootlegged ripoff of its own franchise. Not even Arnold Schwarzenegger, who faced off against Stallone in the first one, could have rescued this from abject boredom. He chose to stay home and tweet about Trump instead of humiliating himself for a small paycheck — we should all be so privileged.