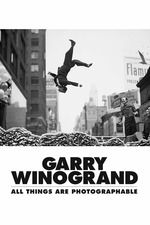 Garry Winogrand: All Things Are Photographable

Garry Winogrand: All Things Are Photographable 2018 ★★★

Garry Winogrand hated being called “a street photographer,” even if he was regarded as the most essential of them all. The great success of Sasha Waters Freyer’s straightforward but evocative documentary “Garry Winogrand: All Things Are Photographable,” is how well it explains why someone could have such a strong aversion to a term that was practically invented to describe them.

Winogrand, for better or worse, was allergic to bullshit. A hyper-masculine Bronx Jew who many of Freyer’s interviewees graciously refer to as “a man of his times” (perhaps because “misogynist” would end the inquiry they’re hoping to deepen), the late artist is often likened to the Norman Mailer of the visual world, a comparison that grows more fraught — and less flattering — by the day. “A photograph is a literal description of how a camera saw a time and space,” we hear Winogrand say in his thick Cassavetes accent towards the very beginning of the film, the first of many excerpted snippets from his final lecture. “A camera describes — to use it for anything else is foolish.”