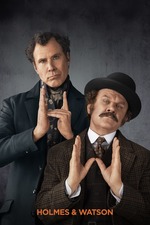 Ten years after “Step Brothers” was gifted unto humanity — and at least five since the world rightfully came to recognize that film as the Dadaist masterpiece that it is — Will Ferrell and John C. Reilly have re-teamed for a comedy that’s somehow even dumber than the one that first galvanized their incredible chemistry. That should have been a good thing. It isn’t.

The trouble with “Holmes & Watson,” a witless Sherlock Holmes spoof that supplies fewer laughs in its entirety than “Step Brothers” does in its deleted scenes, is that the movie can never decide how dumb it wants to be. Or, more accurately, what kind of dumb it wants to be.

Re-imagining fiction’s greatest detective as the kind of world-class egoist that Ferrell could play in his sleep (he’s basically Ron Burgundy with a magnifying glass), this new spin on the public domain’s most popular character twists the legendary sleuth into a man who uses his forensic brilliance as a mask for his emotional ineptitude. While Sherlock can sniff out a killer from the faintest trace of vinegar on the lapel of their shirt, he’s clueless when it comes to human behavior; it only takes him a few minutes to catch the nefarious Professor Moriarty (an inexplicably under-used Ralph Fiennes, whose brief performance could have been cobbled together with footage from the many other movies in which he’s played a dastardly 19th century British man), but he might go the rest of his life without understanding how Dr. John Watson (Reilly) feels about playing second fiddle to his famous boss and best friend.