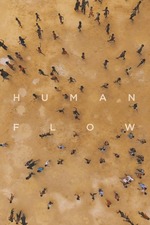 There are any number of unforgettable images in Ai Weiwei’s “Human Flow,” the most necessary and comprehensive documentary to date about our planet’s current refugee crisis, but the most indelible of them all is borrowed from a movie about a very different humanitarian failure. For 1956’s “Night and Fog,” Alain Resnais ventured into the haunted ruins of concentration camps Auschwitz and Majdanek, training his camera on the evidence that had been left behind. A still ocean of women’s hair. A mountain of empty shoes, spilling through the rooms of a building like a flood. Symbols that convey the scale of apathy and death better than bodies ever could, because the horror of bodies is too all-consuming to allow for any deeper understanding.

In “Human Flow,” the film’s famous artist-director shoots a massive heap of abandoned lifejackets from above, the camera lifting into the sky to reveal hundreds (or thousands) of the vests piled on top of each other like an endless orange sea. It’s the kind of moment that epitomizes why this is one of the few documentaries to use drone cinematography in a way that doesn’t smack of vanity. It’s also a moment that’s even more powerful for anyone familiar with Ai’s “Law of the Journey” installation, for which he wrapped a Berlin concert hall in the litter of a 21st century migration — here, he found his materials in the real world. We understand that every one of those lifejackets has a story to tell, a visceral realization that’s more effective than actually hearing them all.