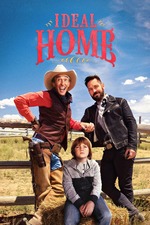 A lot can happen in 10 years. That’s how long it’s been since writer-director Andrew Fleming first hatched the concept for “Ideal Home,” the idea coming to him when he was on the set of his arid Sundance hit, “Hamlet 2.” The world has come pretty damn far since then, if not quite far enough.

Back in 2008, a casually disposable comedy about the virtues of queer parenthood might have seemed progressive, even if it starred two straight actors and made their characters into human cartoons whose sexuality is used as the punchline of almost every joke. In 2018, that same comedy feels like a time capsule that someone forgot to bury — you can still get a laugh or two from looking at the stuff inside, but it’s hard to know what we’re supposed to do with it now that the future that “Ideal Home” wants is already behind us. The film isn’t funny enough to get around that temporal dissonance, and it isn’t nuanced or grounded enough to reconcile it. Still it does feature Steve Coogan rocking a t-shirt that reads: “I shaved my balls for this?,” so it’s not as if we’re dealing with a *total* whiff.