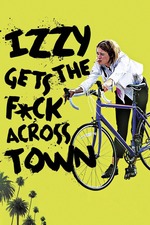 At the risk of making it sound better than it is, Christian Papierniak’s “Izzy Gets the F*ck Across Town” is sort of like a Riot grrrl riff on “Inside Llewyn Davis.” Imagine if the Coen brothers’ lonely and embittered hero had once been in Le Tigre instead of a folk duo, and you’ll have a decent feel for the kind of emotional riptide that stirs beneath the surface of this ramshackle comedy. It’s broad and sloppy where “Inside Llewyn Davis” is specific and precise — linear where that film oozes in all directions like an open wound — but an electric lead performance and a growing sense of self make it worth your while to see that Izzy gets where she’s going.

Three years ago, Izzy (an erratic, combustible, altogether perfect Mackenzie Davis) was playing at SXSW with her sister (Carrie Coon). These days, she’s a couch-surfing L.A. transplant who’s been pulverized by the meat grinder of the city’s gig economy. Discounting the inexplicable, rose-tinted dream sequence that opens the film, we first meet Izzy when she wakes up in a stranger’s bed one afternoon. The good news is that the stranger is a nice helicopter pilot, and he looks an awful lot like Lakeith Stanfield (one of several notable actors who drops in for a playful bit part).