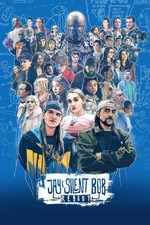 You already know if you want to see a movie called “Jay and Silent Bob Reboot,” but in the unlikely event that anyone out there is still on the fence about buying a ticket for this Charlie Kaufman-esque belly flop back into the depths of the View Askewniverse, it might help to know that Kevin Smith’s latest bit of self-mythologizing starts with a proud nod to “Clerks II,” a film that was only memorable for Harvey Weinstein’s insistence that it earned an eight-minute standing ovation at Cannes.

The scene begins with the feds surrounding a New Jersey chicken shack called “Cock Smokers,” and ends with Jay (Jason Mewes’ perma-stoned alter-ego) rehashing an old bit that involves him tucking his penis between his legs in tribute to the serial killer from “The Silence of the Lambs.” Yes, “Goodbye Horses” plays on the soundtrack. A callback to a sight gag from a sequel that was already dependent on viewers’ familiarity with a different movie the first time around, it’s hard to imagine a more appropriate opening for a stilted comedy that gets baked on its own nostalgia, confuses references with context, and internalizes “for fans only” as a business strategy instead of a flaw. Mewes’ pubes are the perfect litmus test for your potential enjoyment: Either you’re so high on this particular supply that you’d happily pay to watch Smith and his celebrity friends lazily exhume their old jokes for 95 minutes, or you’re in for a bumpy night.