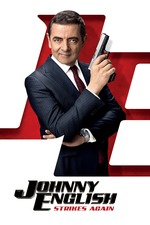 Like the monarchy, the metric system, and the inexplicable desire to refer to Madonna as “Madge,” the “Johnny English” franchise is one of those British things that’s never really made it across the Atlantic. Hatched from an ad campaign that remains considerably funnier than any of the feature comedies that have derived from it, these doddering James Bond spoofs are reliably massive draws on the other side of the pond, but American moviegoers don’t seem to have any interest in seeing Rowan Atkinson wreak havoc as a braindead spy who always manages to save the day (2011’s “Johnny English Reborn,” the second chapter of what’s now a trilogy, grossed a measly five percent of its $160 million take from the United States). If nothing else, the limp and lifeless “Johnny English Strikes Again” serves as final confirmation that America was right to reject these moldy imports — consider it a pyrrhic victory for our paranoid new border policies.

More of the same, but also just a little bit less, “Johnny English Strikes Again” may not boast much appeal for domestic moviegoers, but at least it’s perfectly accessible for any series newcomers who happen to walk into the wrong theater by mistake. The premise couldn’t be simpler: What if Mr. Bean were cast as James Bond? No time travel, no fembots, no sharks with laser beams on their foreheads — the only real difference between James Bond and Johnny English is that one of them adopts “007” as a codename, and the other as an I.Q. score (Neal Purvis and Robert Wade even developed a draft of the first installment the same year they wrote “The World Is Not Enough”). English is essentially a walking parody of “British Intelligence,” and while that could be a fun idea to skewer in the Brexit era, the scattered political commentary in “Strikes Again” is as undercooked as the jokes.