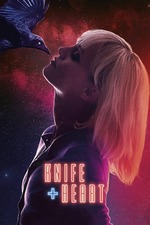 Subsequent slaughters are a touch less creative, but that doesn’t stop the violence from enflaming the imagination of an atomic blonde super-producer named Anne (Vanessa Paradis), who finds herself increasingly inspired by the sudden rash of death around her. It’s all a bit close to home, as all of the corpses come from her troupe of fresh-faced twinks, and yet Anne eagerly re-stages the killings as part of her meta new masterwork, “Homocidal.” Anything to impress her editor and ex-lover, Loïs (Kate Moran), who’s starting to think that Anne’s butter may have slid off her breadknife.

So begins an unclassifiable genre exercise that unfolds like a vintage slasher by way of Kenneth Anger, and proves to be every bit as fascinating and difficult as that sounds, if not quite as much fun. On paper, Yann Gonzalez’s “Knife + Heart” sounds like an entirely perfect follow-up to his 2013 debut, “You and the Night.” A pansexual fantasia about a gaggle of symbolic characters who get together for an orgy, the film compellingly melded elements of camp, smut, romance, Anger, and the self-aware stylization of Jean Genet into a chromatic fever that established its writer-director as a unique new voice in contemporary queer cinema (or just cinema, full-stop).