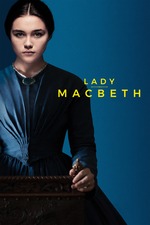 There aren’t very many words spoken in William Oldroyd’s “Lady Macbeth” — most of the communication is done through sex, abuse, and murder — but not a one of them is wasted or forgotten. Indeed, the film’s emblematically terse first exchange looms over the 85 minutes that follow like a dark shadow on a bitter day, and it’s proof that Florence Pugh deserves more attention in this year’s competitive awards season.

It’s Katherine’s (Pugh) wedding night, and the 17-year-old bride is being dressed for her deflowering. Her new husband’s chambermaid does the honors, Anna (Naomi Ackie), slipping the girl into her nightgown. “Are you cold?” Anna asks, a valid question on a brutal winter night in the North of England circa 1865. “No,” Katherine responds. “Nervous?” “No.” She looks into Anna’s eyes, either searching the servant’s face to see if she has reason to be nervous, or trying to indicate that it’s her husband who should be nervous of her. Later that night, Katherine is alone with her groom (Paul Hilton) for the first time. “You’re not too cold?” Alexander wonders insincerely from the far side of the room. “I’m thick-skinned,” she replies.