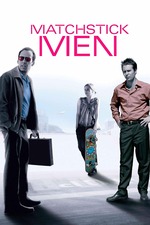 For a deeply satisfying movie that hinges on a career-defining performance from one of modern cinema’s most fascinating stars, Ridley Scott’s “Matchstick Men” has a strange way of falling through the cracks. Released to a tepid response in September 2003, this slippery tale of a con artist with a guilty conscience was too much of a tweener to find the audience it deserved, and — much like its twitchy protagonist — was also conflicted about swindling people out of their money. For a major Hollywood film that climaxes with a bare-assed Nicolas Cage running around an L.A. parking garage, its “B” Cinemascore is borderline miraculous.

Even now, 15 years to the month since its debut, “Matchstick Men” lurks in the dark recesses of basic cable. Surf a few channels up from the big game on a Sunday afternoon and you’ll often find it playing on a semi-automatic loop, as if baiting you to accept it as the the dad movie it’s been from the start. That might even be the cleanest way of classifying this eccentric genre hybrid, which is the kind of kooky mid-budget studio fare that only a titan like Scott can still push through the system. A bittersweet character drama that fools you into thinking it’s a low-stakes caper, the film is too sensitive to be lumped into the heist genre, and too twisty to be remembered as a long-con about a criminal’s moral redemption.

Garry Winogrand: All Things Are Photographable