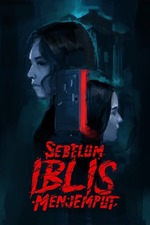 May the Devil Take You

They say that idle hands are the devil’s playthings, but Indonesian schlockmeister Timo Tjahjanto is never busier than when he’s skirting around the fringes of hell. Just a few long weeks after the release of his gonzo and blood-drenched beat-em-up, “The Night Comes for Us,” Tjahjanto is back with a gonzo and blood-drenched dose of domestic horror, “May the Devil Take You” (viewers familiar with the director’s gobstopping “V/H/S 2” segment won’t be surprised to see that he’s drawn to movies about the inescapable forces of darkness). Both films are available to stream on Netflix, both films offer giddy proof of Tjahjanto’s insatiable appetite for human suffering (both on the screen and in the audience), and both films become interminable reminders that geysers of blood can only get you so far.

A Sam Raimi homage that festers into a Sam Raimi knockoff, “May the Devil Take You” is geared towards “The Evil Dead” fans who might feel nostalgic for the go-for-broke splatterfests of yore; genre fans who yearn for the days when all you needed to make a movie was a demon and some poor souls for it to possess (and enough fake blood to re-enact the Civil War). And yet, Ari Aster’s recent “Hereditary” might be the first horror film that comes to mind, as this one essentially picks up where that one left off. A middle-aged man named Lesmana (“The Raid” baddie Ray Sahetapy) sits in a dilapidated villa, waiting for a knock on the door. It comes from a dark priestess, (Ruth Marini), veiled in white and wearing hair down to the backs of her knees. She guides the quivering man down into the basement, and —again, just in case there was any ambiguity about what’s going on here — draws a pentagram around a severed goat’s head in order to prepare for the Satanic ritual in which Lesmana will sell the devil his soul in exchange for untold riches. We’ve all been there.

Spider-Man: Into the Spider-Verse