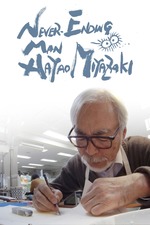 Here is just a tiny sample of the many different ways that Hayao Miyazaki — arguably the greatest animator the cinema has ever seen — describes himself in Kaku Arakawa’s documentary about the artist’s life since his most recent attempt to retire: “I’m an old geezer.” “I’m used up.” And, at the 2013 press conference where he publicly declared that his beloved Studio Ghibli would no longer be in the business of making feature-length films: “I’ve decided to treat any desire to continue as the delusions of an old man.”

As anyone who’s seen Mami Sunada’s extraordinary “The Kingdom of Dreams and Madness” already knows, Miyazaki can be kind of a buzzkill. And here, in “Never-Ending Man: Hayao Miyazaki,” the creator of profoundly vital movies like “My Neighbor Totoro” and “Spirited Away” is full-on goth.

Originally aired on NHK WORLD TV in 2016, and now being released in U.S. theaters for a special two-night run, “Never-Ending Man” is a little too meaty to be written off as a curio for die-hard fans, and a little too lean to be worth recommending to a general audience; again, “The Kingdom of Dreams and Madness” is a much richer experience in every respect. Still, the insight Arakawa’s documentary offers into Miyazaki’s inner struggle — and the perspective it provides of the incurable drive and self-doubt that churn inside so many artists — makes it a valuable portrait, even if Miyazaki’s own magnum opus, “The Wind Rises,” covered much of the same ground in a more affecting way.