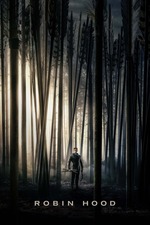 This year has seen a (small) handful of movies as bad as Otto Bathurst’s revisionist new “Robin Hood,” but none of them — not “Mile 22” nor “The Happytime Murders” nor even Dinesh D’Souza’s “Death of a Nation” — have been more in denial of their own badness. If nothing else, this accidentally hilarious, goofy train wreck of an origin story most definitely has the courage of its convictions. Alas, the film isn’t smart enough to recognize that its convictions are dumb, and it doesn’t have the goods to back them up in the first place.

Brace yourselves for an “edgy,” modern (but not modernized) retelling of a really old myth that opens with a voiceover instructing viewers to “Forget history, forget what you believe, forget what you know,” before launching into a wannabe blockbuster so derivative that other directors should receive its residuals. Gird your loins for a misguided attempt to profit off the public domain that takes its one big idea — what if we marketed 15th century class warfare to millennials? — and leans into it so hard that the movie starts to feel less like Robin Hood than it does a castrated “Riverdale” spin-off for Bernie bros (it’s always fun to watch a shameless product of capitalist machinery try and sell itself on socialist ideals).

May the Devil Take You