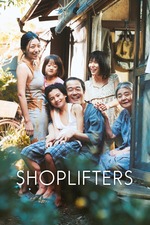 Osamu and his wife Nobuyo can’t afford to have sex anymore. Middle-aged and marginally employed, the Shibata couple is crammed into a ramshackle apartment on the outskirts of Tokyo, along with a pre-teen son named Shota (Jyo Kairi), Nobuyo’s younger sister (Matsuoka Mayu), and the frail grandmother whose monthly pension keeps everything from falling apart. The musty hovel can hardly fit all of the life that’s stuffed inside of it; random boxes and old toys are scattered in every direction, as if everyone would rather live in the mess they’ve made than dare to remember all the things they’ve lost. Even if Osamu and Nobuyo had the time to screw around, there’d be nowhere for them to do it.

But they love each other, and find other ways of expressing the bond that exists between them. “We’re connected by our hearts,” Osamu says with his impish grin, laughing it off, burying the thought somewhere in the ever-growing mountain of priceless junk that his family hoards in their apartment. He might be in denial, but he’s not wrong.

The Shibatas are connected in any number of different ways: Love, money, loneliness, scars, money (money deserves to get mentioned twice). Also, petty thievery: Osamu and Shota have fun stealing things together, the duo sharing an adorable fist-bump before every robbery. And it’s good that the Shibata has so much in common, as all of those various binding agents will be put to the test over the course of Kore-eda Hirokazu’s miraculous “Shoplifters,” among the very best of the writer-director’s delicate, deceptive, and profoundly moving dramas about the forces that hold a family together (or don’t).