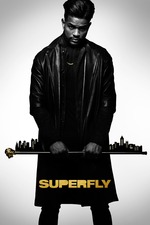 There’s a lot of snappy dialogue in “Superfly,” Director X’s fun, swaggering, and violent update of the 1972 blaxploitation classic, but one quote in particular follows the film’s hero like some kind of thug life phantom: “It doesn’t matter how smart you are in a world of stupid motherfuckers.” That’s the crux of the problem for Youngblood Priest, the savviest coke dealer in all of Atlanta — he’s the best player in a game that no one can ever win (or even hope to survive).

It doesn’t matter how careful you are, or how rich you get, because someone in the drug trade is always on the brink of cutting you down. Maybe it’s that trigger-happy kid from the local gang who’s always looking for some petty excuse to unload his Glock. Maybe it’s those crooked local cops who shoot innocent black men for sport, or blackmail them for obscene amounts of money. Maybe it’s the Mexican cartel lord who likes to throw employees out the door of his private plane, and murder his enemies by emulsifying them into a blood-red turd of goo. It doesn’t matter. As one especially wise character puts it: “Dance with the evil long enough and he’s going to step on your feet.”