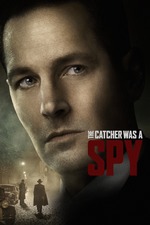 On paper, this should have been a home run. Adapted from Nicholas Dawidoff’s historical biography of the same name, “The Catcher Was a Spy” is a stiff and serene biopic about a man named Moe Berg, an enigmatic Jew who capped off his middling career with the Boston Red Sox by traveling to Nazi Germany under secret government orders to determine if Hitler was building an atomic bomb, and to assassinate the Nobel Prize-winning scientist in charge of the project if so.

It’s a hell of a war story, combining the foreign intrigue of “The Third Man” with the high-wire suspense of “Where Eagles Dare” (with a touch of homoerotic tension drizzled on top for good measure). Throw in an all-star cast that surrounds Paul Rudd’s lead performance with pinch-hitters like (take a deep breath) Paul Giamatti, Mark Strong, Tom Wilkinson, Hiroyuki Sanada, Sienna Miller, Guy Pearce, Shea Whigman, Jeff Daniels, Connie Nielsen, and the great Giancarlo Giannini, and you’ve got a film that feels like a grand slam even before it steps up to the plate.

In the immortal words of “A History of Violence” baddie Richie Cusack: “How do you fuck that up!?”