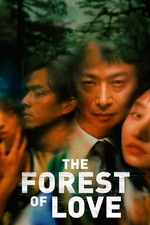 The Forest of Love

After shooting 15 movies and two TV shows this decade alone, hyper-prolific renegade filmmaker Sono Sion was rushed to a Tokyo hospital in February, where emergency surgery was performed to save his life. The gonzo auteur behind the gleefully demented likes of “Suicide Circle” and “Why Don’t You Play in Hell?” had just finished work on an unhinged Amazon Prime series called “Tokyo Vampire Hotel,” which may have been his wildest project thus far; high praise for someone whose previous career highlights include the likes of “Love Exposure” (a four-hour epic about a teenage Catholic who falls in with a secret cult of up-skirt panty photographers) and “Tokyo Tribe” (a hyper-violent rap opera about a gangster who torches an entire city to the ground to compensate for his micro-penis).

Needless to say, the only thing less surprising than the fact that Sono suffered a heart attack is the fact that it doesn’t really seem to have slowed him down.

Growing impatient while he waited for production to begin on his English-language debut (that would be “Prisoners of the Ghostland,” which rather obviously stars Nicolas Cage), the 57-year-old Sono decided to sneak in a quick little Netflix offering on the side; you know, a casual, “The Irishman”-sized epic about serial killers, sexual trauma, the collateral damage of artistic creation, plus several of the filmmaker’s other favorite themes. The only concession that Sono appears to have made with “The Forest of Love” — an exuberant psychosexual bloodfeast made by the kind of movie-obsessed madman whose irrepressible life force can only be expressed through a camera lens — is that the finished product has been chopped down into an 150-minute feature. Perhaps that’s for the best: Inspiring as it is to see that Sono hasn’t missed a beat, even his most diehard fans may feel that his latest is long enough.