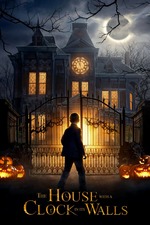 The House with a Clock in Its Walls

John Bellairs’ 1973 novel “The House with a Clock in Its Walls” was the first of the author’s six YA books to be illustrated by the late Edward Gorey, whose pen-and-ink drawings were sinister and delightful in equal measure; they invited children to embrace the darkness of growing up without surrendering the sense of wonder that kept them young. Universal’s soulless 2018 film adaptation of the same name, on the other hand, is directed by “Hostel” auteur Eli Roth, whose cartoonish approach makes this bittersweet saga of witchcraft and wizardry feel like nothing more than a well-furnished theme park attraction. Still, it’s sure to be a veritable nightmare factory for kids of a certain age, and there can only be so much shade to throw at a movie in which Cate Blanchett head-butts a demonically possessed pumpkin in order to help save the world from Kyle MacLachlan’s rotting corpse.

Harkening back to the relatively macabre kids movies we used to get in the days before “Twilight” and “Harry Potter” (Roth channels everything from “Casper” to “The Watcher in the Woods”), “The House with a Clock in Its Walls” lacks the visual imagination required to do the book justice, though it almost has enough heart to capture the spirit of the story behind it. The action is set in the fictional ‘burb of New Zebedee, Michigan, circa 1955. It’s all glittering marquees, Ovaltine shakes, and other Amblin-esque symbols of Americana as far as the eye can see, but the newly orphaned Lewis Barnavelt (pre-teen actor Owen Vaccaro, looking like an aged-up Jacob Tremblay and spotting a pair of aviator goggles that give off a worrying “The Book of Henry” vibe) is about to move into the dark side of town, which hides all manner of magical secrets.