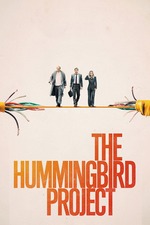 There are any number of movies that would be hard to believe if they weren’t based on a true story. Much less common is something like “War Witch” director Kim Nguyen’s “The Hummingbird Project,” which is so mundanely quixotic that it’s hard to believe it’s not based on a true story. We’re talking about a financial thriller that stars Jesse Eisenberg and a bald Alexander Skarsgård as two Wall Street nerds who try to build a four-inch tunnel that stretches from Kansas to New Jersey. Their hope, we learn, is to run a fiber-optic cable across the eastern half of the United States that will allow their computers to react to the markets a few milliseconds faster than the competition, netting them millions of dollars in the process.

Welcome to the dumb and ultra-lucrative world of high-frequency trading, where automated systems execute millions of stock orders in the blink of an eye, and even the most ambitious heist plot is endowed with all the excitement of sub-contracting an elaborate construction job. There’s a good reason why no one’s ever made a movie about this before — in fact, there are probably a few. And given the degree to which “The Hummingbird Project” struggles to explain its strange mechanics, or leverage them to dramatize its even stranger characters, odds are that no one will ever make a movie about this again. Still, it’s hard to fault Nguyen for having the vision to give it a go, especially when you consider that financing and filming this oddity must have been a Herzogian quest as quixotic as the tunnel itself.