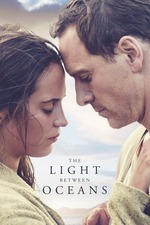 The Light Between Oceans

Several miles off the coast of Tasmania, across a stretch of water so cold and jagged that it makes the river Styx seem like a kiddie pool, a tight-lipped World War I vet lives on a tiny island by his lonesome. Unlike most of the lighthouse keepers who come to the impossibly remote shores of Janus Rock, Tom Sherbourne (Michael Fassbender) arrives by his lonesome — all the better for someone who wants to “Get away from things for a while.” Eventually, Tom is joined by Isabel (Alicia Vikander), the bright-eyed local beauty who agrees to be his wife. The idyllic solitude they share together might last forever if not for the series of devastating miscarriages that sink them like a squall, but the sea is full of hope for those who keep a desperate eye on the shore.

As a Decemberists song, “The Light Between Oceans” could have been a masterpiece. As a middlebrow period melodrama in the vein of “The Painted Veil, “Lust, Caution,” and other swooning romances scored by the great Alexandre Desplat, the film — much like the twinkling musical tempest the French composer wrote for it — is lush and lacking in equal measure.