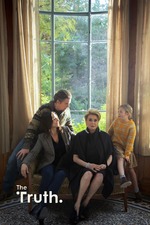 Filmmaker Kore-eda Hirokazu once predicted that his Palme d’Or-winning “Shoplifters” would come to represent a major turning point in his career — the end of one phase, and the beginning of another. As it turns out, “The Truth” is inevitably a bit more complicated.

The first movie the Japanese writer-director has made since winning the film world’s most prestigious award is also the first that he’s ever shot in another tongue or country, and that fact alone is enough to make Kore-eda’s latest feel like an outlier in any number of obvious ways; a foreign organ transplanted into an otherwise cohesive body of work. On the other hand, this wise and diaphanous little drama finds Kore-eda once again exploring his usual obsessions, as the man behind the likes of “Still Walking” and “After the Storm” offers yet another insightful look at the underlying fabric of a modern family.

In fact, “The Truth” sometimes feels like a mirror image of “Shoplifters,” albeit one that looks a hell of a lot brighter now that it’s been refracted through the bruised golden light of Paris in autumn. If that was a story about strangers pretending to be relatives, this is a story about relatives pretending to be strangers. This warm and quietly moving family portrait may be the most literal (and least heartbreaking) of several movies that Kore-eda has made about the performative nature of parent-child relationships, but it’s one that ironically feels novel enough — and perhaps even necessary — because it reaches back to the earliest days of the director’s career in order to filter Kore-eda’s recent fixations through some of his most formative ideas. When it starts, “The Truth” seems like a radical change of pace. By the time it’s over, the movie feels more like a surefooted lateral step in a new direction.