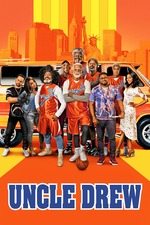 The best film ever adapted from a series of soft drink commercials (tough luck, “Space Jam),” Charles Stone III’s “Uncle Drew” is such a well-acted, warm-hearted basketball comedy that you’re liable to forget about its corporate origins. To be honest, it’s hard to think about such things when you’re struggling to make sense out of Reggie Miller — the ex-Pacer whose three-point daggers taught a generation of young Knicks fans what it means to hate another human being — being an immensely likable actor. And a good one.

Of course, you’re also liable to forget that Reggie Miller is even onscreen in the first place. Like most of the NBA legends who star in this movie, Miller is playing an old-timer several decades his senior, and the Hall of Famer is rendered virtually unrecognizable by layers and layers of Oscar-worthy makeup. To clarify: All of the NBA stars in “Uncle Drew” are caked in all sorts of sinewy latex, and most of them are rendered virtually unrecognizable. At the end of the day, there’s just no way of disguising Shaq.