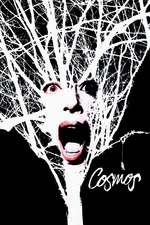 My second Żuławski. One would think after viewing his 1981 film, Possession, that anyone would be prepared for more byzantine, histrionic, ontologically-enslaved storylines, but that is not the case with his final feature here. Cosmos, adapted from the novel of the same name by Witold Gombrowicz (there, Kosmos), finds itself firmly situated within Żuławski's manic inflections, yet what differentiates this from the rest of his work — as far as my slim familiarity with them is concerned — is the installation of dark comedy. The film is absurd and comic, but never disturbing or unsettling, a for-shame omission undoubtedly when all the tonal peculiarities here are delivered through arcane, ornate dialogue and clumsy absurdist humor. It is the blackest of humor, but nothing lands as well as it should, especially when so much of the film's narrative is structured with an almost impenetrable constitution. The story concerns a young, idea-seeking writer and his friend looking to escape the pressures of the world by staying in a quaint, family-owned inn, yet their stay is incessantly troubled by sinister omens and the writer's carcinogenic obsession with the married daughter of the inn's owners. Such a premise bespeaks a ripe breeding ground for disturbing consequences and/or black humor, but nothing comes of it. The first act has its share of amusing buffoonery and overwrought performances, yet the film soon becomes such a tribulation, a plodding assignment in near-nothingness — which, funnily enough, 'nothing' becomes a brief topic by one of the film's many epsitemological-spouting characters. The performances are wacky enough and the cinematography by André Szankowski bears some great handheld camerawork, but there is little here to digest despite my believing this is a story that likely works better in print than in film (there's even a postmodernist curve in the final segment of the film where the main characters purports his story would work as a film... later, lighting fixtures can clearly be seen filling the scene). One could say the film is playing with themes in literature, metaphysics, homosexuality, doppelgängers, Freudian complexes, and authorship, but very little here germinates into something fruitful. A shame given how much Possession's schizophrenic dealings in psychosis and sexuality worked wonders, yet Cosmos, as much as it tries for a juggling in humor and distress, never sticks the landing.