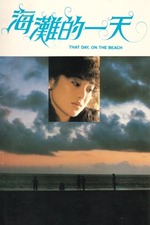 My seventh Yang, and the film frequently cited as the first major work of the Taiwanese New Wave: the turn in early 80s Taiwanese cinema in which neorealism and adherences to both urban and rural family stories took precedence, overturning commercial melodramas and action films. [Fellow member of the TNW, and friend to Yang, director Hou Hsiao-hsien makes a small appearance in the film as a pencil pusher. Many young directors, peers of Hou and Yang, began the movement, and so goes to show how friends, members of the same "initiative" can birth new art.]

From the start, auteur Edward Yang was in love with Elvis. Presley's 1956 pop-rock song in "Hound Dog" plays happily in a dance club scene, our young protagonist in Sylvia Chang's Jia Li bouncing to Presley's hyper-tempo track next to a blossoming lover in Dewei, a friend of a friend she met earlier. (Oh how magical it is to see Yang orchestrate stories of young love.) The track is fast and its beat is heavy and sharp, but its lyrics are, by contrast, almost cynical and sorrowful, specifically:

"You ain't nothin' but a hound dog
Cryin' all the time
...
Well, they said you was high-classed
Well, that was just a lie
...
And you ain't no friend of mine"

All five of those lines, by happenstance or not, relate to some circumstance found in Yang's melodramatic feature film debut, That Day, on the Beach. The first couplet maintains the sadness that remains prevalent throughout the film, and the resentment that is held by others who detest seeing others sad, selfishly or culturally (i.e. masculinity, and the custom of Asian culture). The next couplet refers to gold-digging men and women, or the disappointment that comes in relationships when the one we love is not the perfect person we have prearranged in our head. The final line is perhaps the major throughline of the narrative, here made emblematic; a declarative statement that signals the end of a bond. And not simply of a platonic friendship, as Elvis suggests, but of all relationships romantic or otherwise—something that happens regularly in the film.

Beethoven, however, first makes an entrance, long before Presley. His Piano Concerto No. 3 opens the film, first heard non-diegetically before a cut to a bedside radio reveals it to be a diegetic piece. One that happens to be conducted by one of the film's two major characters; the first, of course, in businesswoman Jia Li, and now in Terry Hu's Tan Weiqing, a Taiwanese woman who makes a living by conducting German music. Gerardo Matos Rodríguez's tango "La cumparsita" also makes an appearance, the background music for (yet again) the beginning of a romantic relationship, and another that is doomed to fail. Once more, another jubilant song made some sort of ill omen. Here, music is deadly.

The film follows Li and Weiqing as they reminisce about their lives over lunch after being thirteen years apart. It is Beethoven that brought them together, with news of Weiqing's return to Taiwan overheard on that aforementioned bedside radio. And the table they are seated at—one in an affluent restaurant and covered in a pearly white tablecloth —soon becomes a minefield of regret, repentance, and self-reproach. In the stories they share, mainly focusing on Li's life, the 166-minute film predominately takes place in flashback, beginning in the pair's youth (their first meeting, then their parting), and then nearly all the way up to the point where they must, again, part ways after an afternoon lunch. A lunch where neither of them hardly drink or eat; only minced words and silence crosses over that white cloth.

As such, this flashback structure yields crosscutting between the past and the present, and often does he do it with L and J cuts—respectively, audio from the preceding scene continues to play over the footage from the following scene, and the opposite, audio from the following scene plays over video from the preceding footage. As a result, so clearly does the past linger in the present, and the present lingers in the past. Memories invade and overlap, with their past and present lives effectively canceling the other out, keeping these women arrested and unable to move on. Some of these memories are mere fragments, scenes that are incomplete or unfinished until we later see the other half, the "end," of the scene when it is time to confront the reality of their mistakes.

Sometimes the women provide voice-over, manufacturing these symbolic gateways toward epiphany. Doorways to regrets they forgot they had. Then there are the moments where neither of the two says anything at all. And such deep silences they are, pointedly in those recurring displays in which we see these characters wander through the darkness in underlit hallways and rooms. Lost souls looking for the light of happiness. Conversely, there are scenes or actions where the sound is loud, almost blaringly so. The way departing trains rumble, one of the first instances where friends take leave. How the ocean tide crashes, recedes, then crashes again; a whitewater torrent of emotions in itself. Or how a printing press lurches loudly just before a younger Li is admonished for her lackluster work performance.

What runs through the film, as well, is the relationship of not only two people but of entire families, the interplay of the generations, and of Taiwan entire. What traditions we keep or discard. What dreams of our future are our own or those of our parents. The disparity between arranged marriages and marriages brought out of "true love," and the indecisive question of which is more fortuitous—or if marriage is at all something that is secure/bountiful/sheltering/beautiful. Some marry into wealth, whether willingly or unwillingly, and end up in a dying marriage. Some marry out of love and are still presented with a crumbling marriage. Here, as well, it would seem even infidelity is hereditary.

Li may be able to prove herself an adept florist, arranging flowers in beautiful displays, but she cannot do the same for her life. And eventually, even her pretty flowers begin to wilt. Her first sign is her home door, a lattice of metal that could be mistaken for prison cell bars. Her metal door even closes with the auditory makeup of a cell door slamming shut. Her marriage to Dewei, a general manager at his college-day friend's firm, is effectively a bastille of loneliness.

A son struggles in his studies to become a surgeon—a profession pushed by his surgeon father—after realizing his aversion to the sight of blood. Simultaneously the practice of private homecare is being replaced with massive hospitals. Seeing the passage of a couple of decades here in Yang's debut makes the evolution of Taiwan palpable; a theme that Yang would return to time and time again. The old die and the young linger, all in a perpetual cycle of suffering. Yang touches briefly upon what "world" people are born into: one of optimism or one of cynicism. How we are nurtured. Through what color of glasses are we seeing the world through. By the end of That Day, on the Beach, we know the color these characters are wearing.

There is also a mystery element to the film, an Antonioni-esque question that is never answered. Like L'avventura, a character disappears from the film; vanishing utterly and completely from the film, both ostensibly under the waves of the sea. We wonder where they have gone—had they died or absconded? Under life-threatening circumstances or otherwise? Yang, like Antonioni, cares not at all for an answer, and so too does one of the film's central characters. Even after all of Li and Weiqing's reminiscing, closure is still not found and old wounds are still open. We do not get closure and despite that French New Wave, freeze-frame ending that may suggest otherwise, we are left in stasis. We might as well be locked up behind bars.

Ultimately, however, the film's theme can be condensed into a simple thesis: how time slips away from all of us. How "that day, on the beach" could have been an eternity. Or simply one day out of thousands. How we can remember one day, cherish another, then forget the multitude of others. If and when the concept of time disappears altogether. If we are simply tiny bodies bouncing about on a nondescript stream of existence. However, the film's penultimate scene, in a hospital bed, shows how in the window of a minute can we find happiness... or the beauty in simply knowing we are. Touching the bars of the bed's headboard, the smooth metal of a bedside table, the way sunlight seeps through a window.

In a way, That Day, on the Beach is a precursor to Yang's 1991 masterwork, A Brighter Summer Day, perhaps more than any of his early work. And not just because of the protracted runtime, but also for the way love is presented as a damning concept, the manner in which we may not understand love, the filial and social politics of Taiwanese life, how love triangles are annihilating proxies, the way Yang's love for western rock and roll runs deep, and the eternal search we all have in finding meaning/purpose/love in life. If we can find it at all, and even if we do... if it is even real.

And again... from the start... Yang proved himself to be one of our great artists. One fully formed; with a mind crowded by ideas and a love for the human condition. And to think he had higher to go yet after this. What a film. What a filmmaker.

Added to:
The Films of Taiwan [Ranked]
Edward Yang [Ranked]

Removed from:
Films I Most Want to See From Each Year