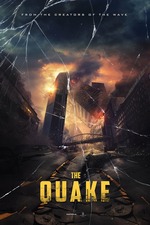 Rapid-fire review. More of the same if you've already seen its predecessor, The Wave. Had zero knowledge going in that this is a sequel to that tsunami-laden film which in itself is a sturdy disaster film when compared to the genre cesspool it found itself swimming in. At least it got to ride the waves. The Quake, once again following the doomsayer-mongering geologist from the first film, finds himself and his family once again in mother nature's way. I admire that the film takes its time before delivering the titular quake — ably building up enough suspense and structural fortifications to make the climax that much more worthwhile — but once the concrete begins to crack and the buildings begin to topple, it all comes off as wasted and somewhat characterless. Characterless is perhaps the best description for the film entire, not to mention, it begs the question of why it was ever made in the first place (top Norwegian box office numbers in part, I would assume); might as well throw this family into the ringer again, watching the father once again fail in his attempts to warn naysayers. Otherwise, a killing blow to the film is in the missing falling action. Our characters are stuck on the top floor of a structurally unsound office building one second, then reunited with each other heading off into the sunset the next. It would seem a good chunk of the film is missing. Leagues above most disaster films, but this sequel, while well-stocked in gloomy cinematography and patience, seems to fall to the wayside. A chasm opened up and the film could not escape the abyss.