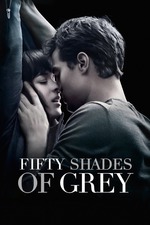 Now this was a waste of time - though thankfully I didn't spend money to see this in the theater. Not that I was planning on doing so myself. Saw this online to download, figured why the hell not, I can probably heckle at this for a couple of hours. It turns out that Fifty Shades Of Grey is probably the most dreadfully boring film I have seen in quite some time. It also doesn't help that it's complete shit either. Then again, It's not like anyone was expecting this to be absolutely amazing, or simply good.

Anastasia "Ana" Steele (Dakota Johnson) is a 21-year-old undergraduate in Washington. When her friend Kate Kavanaugh (Eloise Mumford) becomes ill, Ana steps in her place to interview wealthy entrepreneur, Christian Grey (Jamie Dornan). Over the course of the interview, it's visible that Ana is somewhat attracted to him, though mildly intimidating, but it's Christian who has an eye for her. The two eventually begin to see each other, though under different pretenses. Ana isn't getting the relationship she expected, instead she's in a Dom/Sub relationship. That's pretty much the film in a nut shell.

It's pretty sickening when shit-tier literature from a shit-tier author manages to get published and snag a sweet movie deal with options for the sequel books. All for a cool, hundred million or so. This is the worst type of filmmaking there could be. Of course I'm the wrong intended audience and viewer, but anyone with a (half) brain could figure out that Fifty Shades Of Grey is just horrendous in every way.

The script is what ties everything together here. Packed with some cringe worthy dialogue, eye-rolling lines, throwaway characters, and plot that pretty much runs around in circles. "Does Anastasia Steele want to be his fuck slave or not?". That seems to be the question she asks herself, but can never make up mind. She's not sure if she's happy in this type of relationship and such. But buy her a car and throw other gifts at her, and she'll be happy for days.

That leads me to those steamy sex scenes you filthy bastards were waiting to feast your eyes on. The sex scenes are pretty much on the same level as that of Tommy Wiseau's masterpiece (sarcasm), The Room. By that, they all share a common interest - which is they all require slow pop/R&B songs to accompany them. Mainly in order to appeal more and be more romantic. Instead it looks completely amateurish and frankly hilarious. Then again, it's not Danny Elfman's dreadful of which was reduced to background noise would have sufficed.

Dakota Johnson and Jamie Dornan deliver performances akin to Robert Pattinson and Kristen Stewart from The Twilight Saga. Only difference is those two have gone on to be successful and have good performances. Johnson and Dornan are extremely flat and have absolutely zero chemistry. It's hard to buy them as being serious or romantically linked. Especially since they have literally one facial expression. Dornan stand there with this smug, blank emotionless face (maybe intended for his character, but fuck knows) and there is Johnson who has a look as if she's been struck stupid or something. Their line delivery is awful.

In the long run, Universal is looking at a cash cow, especially with two more films to come. Yes, you read that correctly, two sequels are in production for 2016 and 2017. What more can they possibly try to cover or even add to an alarmingly dull story. All I can say is that Charlie Hunam, you sir have dodged a bullet. A wise move for your career, I'd say.

"If you were mine you wouldn't be able to sit for a week."