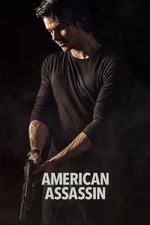 Having never seen The Maze Runner or Teen Wolf, I must admit that the main attraction in this film was actually Michael Keaton and not the titular Dylan O'Brien who leads the way in the film adaptation of Vince Flynn's decent novel of the same name. I read it a couple of years ago on a weekend away and thought it had a Jack Bauer feel about it from the off, and needless to say after looking up some info on the writer discovered he was actually a consultant on 24, so it all fits.

This film focuses on a young man's quest for vengeance after his girlfriend is gunned down by terrorists on a beach in Spain. Attempting to infiltrate the jihadist cell via the internet is a stretch, but the anger, anguish, and guilt, together with the thirst for revenge that O'Brien shows in the opening minutes, makes this an intriguing prospect. Needless to say as the plot progresses plausibility goes out the window as Rapp travels to Libya to join up as a would-be jihadist himself in order to get close to the man who orchestrated the attack in which his girlfriend is killed. From there it's even more far-fetched as he's offered the chance to join a black ops unit and undergo training by ex-Navy SEAL Stan Hurley, played by Michael Keaton. It's then off on a European excursion to stop terrorists getting their hands on stolen plutonium, and a date with Ghost, a former protégé of Hurley who's turned rogue.

Unfortunately this is a fairly generic action thriller, that despite a really good backstory and premise, stretches credibility from the off. The book somehow didn't make some of the scenarios and plot leaps feel quite as implausible for some reason, but here the initial foray of Mitch Rapp (O'Brien) to infiltrate a jihadist cell via the internet smacks of fantasy. That's not to say there aren't some great action sequences and fight scenes, there are, and in Keaton we have a character that chews scenery like no other, but it all lacks that extra bit of something special. O'Brien lacks charisma here, and Taylor Kitsch has seen one too many episodes of 24, with his turn cartoonish at times especially when he's torturing Hurley. It's a mixed bag here I'm afraid, and given that there are at least a dozen novels featuring the character Rapp, the chances of a franchise looked bleak given the critical response to it, but you never know because money talks and this actually made money despite the mauling it got in some quarters.