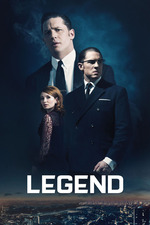 Tom Hardy was rightly handed an Oscar Nomination this year. He may have received the honour for his role in The Revenant, a film I've yet to see personally, but this dual role as London's most notorious twins could easily have given him a similar accolade. The Krays were more than simply a pair of villains, and Brian Helgeland's film throws fresh light on a pair of brothers whose iconic status, long after their imprisonment and subsequent deaths, still ripples in British Culture.
When I was a teenager I had a t-shirt that had a picture of Reggie & Ronnie Kray on the front and the slogan "Free the Krays" on it. I'd read a bit about them and become fascinated by their notoriety. My History teacher at school had a different view to mine, and gave me detention for wearing it along with a stern talk on what heroes were really meant to be. Regardless, I remained interested in them and their, lets call it plight, to be released from prison sentences that were among the stiffest ever handed out. 1990 came, and so did Peter Medak's film about the brothers, starring the Kemps. My interest was maintained and rekindled, and the Krays have always been of fascination ever since. 2012, Birmingham West Midlands, a graffiti appears on a busy motorway flyover near Aston Villa's stadium that accurately portrays the twins in one of their more famous photographs, proof that legends never die, they simply become more iconic.
Tom Hardy manages to create two completely different characters here with ease. Ronnie Kray was a paranoid schizophrenic, you'd think Hardy was too given his performances that feel like the two sides of the same coin. Ronnie is the nutter, Reggie the sane one, or was he? Accounts about the Krays vary, and the film, although it has some violence, seems to shy away from showing anything too gratuitous in favour of attempting to show us that their life of criminality came from Ron's recklessness and illness, with Reggie partly a victim of circumstance dealing with issues thrown up by Ron's behaviour. I loved Hardy's turn as both, the wife drooled over his Reggie, and laughed like a drain at his Ron who was incredible as the unhinged psycho. The film may be a little scattershot at times, but you can't deny the turns from Hardy are exceptional alongside the surprisingly good Emily Browning as the tragic Frances Shea. Narrating the story from beyond the grave was something that didn't quite make sense for me, and certain things didn't ring true with what I'd read about the brothers. The belief was also that Frances was murdered by Ronnie, but the film seems to stick to the more well-known facts about the twins. Helgeland's script does have some fun to it, giving Hardy the chance to shine and deliver some great one-liners. Energetic and authentic looking, this does capture London in the Sixties with aplomb, and once and for all Tom Hardy will finally be considered one of Britain's biggest and brightest talents.