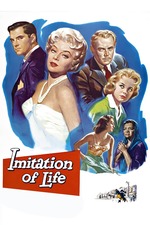 I finished watching the second half of this movie for the third class in a row this morning. My students at Tisch today were angry, ashen. What could I say to them? In the 8am class, I was in tears throughout a lot of the film. Every time Sarah Jane or her mother spoke I had to choke back a gasp. The funeral was more moving than anytime I’d ever experienced it. But in this screening, my usual ironic antagonism towards Suzie turned into a real revulsion. My students, I could tell, were moved. The 9:30am class was more reserved, as usual. As always, I wondered, can they just not connect anymore, in this age of irony, with Sirk’s unusual tonal admixture of brutal honesty and artificiality? By 11, class was a mess. We all seemed to be drifting throughout the course of the morning through the five stages of grief. I felt numb. What could I tell them?

I was on campus in the Tisch building all day during the 9/11 attacks. People who weren’t in New York don’t remember that one of the most frightening aspects of the day was not just what we knew, but what we didn’t know: news reports were filtering in for hours telling us that there were eight more planes in the sky and we waited all morning and all afternoon wondering when and where the next attacks might come or whether the military might end up shooting these planes out of the sky and killing hundreds more. There were reports of bombings on the streets of DC. The phones were down and the subways weren’t running so I was stuck in Tisch and I couldn’t get hold of my parents in DC or my then-boyfriend back in Brooklyn. Every once in a while I’d wander out onto Broadway and see hundreds of people, many with ash-covered faces, wandering north in the middle of the street.

What was I supposed to say to my students today? Not to worry? That it gets better? The last fifteen years have been such utter shit. We invaded a country that didn’t attack us on trumped-up charges and Bush was re-elected? I shut down emotionally after 2004. Eight years of the only president in my lifetime I’ve ever admired, who had to claw against all odds to implement a few, imperfect programs in the face of relentless conservative opposition, all to see it go down the toilet with the election of this profoundly unintelligent, bigoted clown? 22 million people who have health insurance who didn’t have it eight years ago – 85% of whom are happy with their coverage and who, on average, pay $50 a month for it – will now all, most likely, get it revoked thanks to Paul Ryan, who announced this morning that he’s “very excited” about working with Trump? The EPA’s cap-and-trade program – which experts predicted would cut carbon emissions by 30% over the next couple decades – overturned by a party that doesn’t believe in science?

I’ve always been disgusted by American exceptionalism. The notion that a country founded upon a slave economy – with a slave owner enshrined on the dollar bill – is “the greatest nation on Earth”? Lately I’ve been reading Robert Hine and John Faragher’s history of the American West: the night before the election I finished the chapter about the California territorial government’s organized extermination of native people in the decade after the Gold Rush. Everyone knows about the Navajo and the Sioux, but no one ever talks about the Miwok. You know why? Because Americans virtually wiped them off the face of the Earth.

And yet… and yet… how can you be an American and not admit that you, too, cling to the dream of America – the dream of American exceptionalism – just as much as your conservative antagonists? I tease my students for being knee-jerk teleological thinkers, but isn’t there something to the idea that this country has kept on perfecting the democratic ideal – ending slavery, expanding suffrage, fighting for civil rights, embracing multiculturalism, expanding gay rights? This is the irresolvable tension that defines this country – the democratic ideal continually confronted by our racist past – and present.

This movie, now almost sixty years old, still seems to ring true. In SIRK ON SIRK – still one of my all-time favorite movie books, the director, himself an exile from Nazi Germany, explains that he managed to find a way to work in Hollywood by deploying Euripidean irony. Euripides, he claimed, was more intriguing than the other Greek tragedians because he managed to give the ancient Athenians the happy endings they demanded – much like the contemporary Americans – by covering up the innate tragedy of the situation with a baldly artificial deus ex machina finale. For him, the Greek concept of the aporia – an irresolvable internal conflict – is crucial. Each of his characters is defined by an aporia, which is precisely why the surface happy ending is always an illusion, catering to the masses, but recognized by the discerning few. The movie is social criticism, but as Sirk himself maintains, social criticism of both its white and black characters, both the older and the younger generation. All four protagonists struggle with choices that the American racial and gender system makes impossible to solve. It is this very irresolvability that forces each of them to lead only an imitation of a life. The “happy ending,” in which Sarah Jane is re-constituted into the white family – notably, inside a black car that seems eerily reminiscent of the black hearse where her mother’s body lies – is thus quite dark: Sarah Jane can only be happy when she becomes white, but to do so she must kill her mother and end up symbolically dead herself.

So the movie seemed especially pertinent today. America, too, is defined by an aporia – the internal conflict between democracy and racial conflict that cannot be solved – but today Sirk’s Euripidean irony seemed more bitter than ever. It’s one thing to appreciate his ending’s philosophical sophistication from an aestheticized distance. It’s quite another thing to know that you’ll have to live inside of this aporia – politically – not just for the next four years, but for the rest of your life.

Romy - Anatomy of a Face