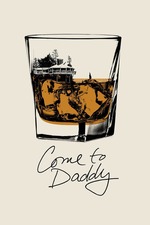 Come to Daddy is a horror comedy following a man in his thirties who travels to a remote cabin to reconnect with his estranged father.

You know when a movie opens with a Beyoncé quote, it’s going to be a gem. This movie was the best possible way to start off the 20th year of FrightFest. Come to Daddy rarely feels like any other movie to the point that it’s even difficult to narrow down what it’s influences could be. It just feels new and fresh especially when it was played in front of Crawl (a movie I didn’t enjoy so much) and Scary Stories to Tell in the Dark (a movie I did really enjoy), two modern horror movies that felt very familiar to many movies that have came before them. This movie comes from a very good script and a crazy story close to director Ant Timpson’s heart involving the death of his father and whilst those roots merge together to create something special, it’s the execution of this idea that makes the movie stand out so much. This movie shoots through tones so fast at times that it rarely gives you chance to think about what genre it’s going to jump to next. Sometimes this can be a little jarring but more often than not it works perfectly. This doesn’t mean the movie itself is fast, it’s the complete opposite. It’s one act of slow burning intrigue, a second act of slow burning terror and a third act that just completely loses it’s mind and isn’t afraid to go insane. There are certain twists that do feel predictable but it’s the set ups surrounding the twists that bring the unpredictability this movie needs to remain interesting.

The acting in this movie is excellent but it’s hard to talk about a lot of it without delving into spoiler territory and that’s the last thing I want to do; the less you know about this movie going into it the better. So for now I’ll just talk about the two main performances that the movie is centred around but every single person within this movie provides a fantastic performance. Elijah Wood shows further proof that he works extremely well in a horror environment. In this movie he plays the very likeable lead character, Norval. From the get go he’s a character that’s very easy to become invested in and sympathise with. He receives so much character development within the first act that you get to know every single thing you need to know about him. When things start to go a little crazy, Wood’s performance only gets better and better as he initiates some of the movie’s funniest comedic scenes. His chemistry with Stephen McHattie’s Gordon is unbearably tense. McHattie is outstanding as the unhinged drunk father character who makes a regular habit of making Norval uncomfortable and the audience too in the mean time. You never quite know what he’s going to do next, adding a constant feeling of dread surrounding his character.

Make no mistake, this movie is a comedy, it’s a black comedy with strong horror themes but it’s a comedy nonetheless. It focuses mainly on dry humour, proving joke after joke that continuously land without putting a ton of effort in to make them land. This doesn’t stop it’s use of horror being completely in your face and effective. Starting off with the use of what you can’t see is what scares you and going on to make use of what you see will shock you and maybe even make you squirm a bit. The gore is incredible and so out of nowhere, adding so much glorified details to the entertaining death sequences. The sound effects during these scenes are almost as grotesque as the visuals and make sure you’re unable to escape the gross out goings on even if you look away. A lot of the time you won’t want to look away because this movie is stunning to look at. It thrives on excellent cinematography to create a great looking movie to keep you glued to the screen at all times.

Overall, Come to Daddy is a unique piece of comedy cinema with an overdose of horror thrown in. It’s intense, it’s hilarious, it’s very well made, it’s everything a black comedy needs to be, especially one that takes as many risks as this one does.