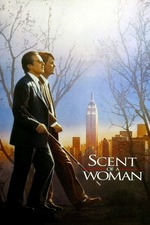 Scent of a Woman

Well if you like it that much, why don’t you sleep with it

Playing a blind character is one of the hardest things an actor can do, playing a mute or a blind, to me that is difficult. Reminds me of Dead Poets Society but with Pacino, he’s one of the greatest actors ever and this is a really good performance from him, up there with his other 90s performances in godfather part 3, heat and devils advocate, his Godfather part 1 and 2 work will always be his best, i’ll be watching Serpico and Dog Day Afternoon soon

There’s a lot of charm and warmth to Pacino here that we don’t often see as he usually plays a criminal/villain, I liked Chris O’Donnell the youngest ive seen his before his Robin days, it’s crazy how he’s still the only live action movie version of Robin (apart from Titans) enjoyed seeing a young Philip Seymour Hoffman too

Very well shot, especially the dance sequence, excellent script, theres a really emotional moment in the film that took me by surprise both Pacino and O’Connell were amazing, Pacino as always gets a killer monologue which he owns.

Hooah is said 8 times in this film, maybe more