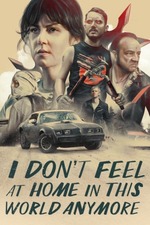 The directorial debut of Macon Blair, aptly-titled I Don't Feel at Home in This World Anymore, is a quirky, often hilarious dark comedy about a woman who just wants people to stop being assholes. Clearly taking queues from Blair's frequent collaborator Jeremy Saulnier, Blair's film similarly plays to the theme of ordinary people being thrown into situations of peril and violence. However, Blair also makes a modest and effective effort to differentiate himself from Saulnier's style, by focusing less on tense violence and more on the nuances of his characters and his satirical dialogue. Though Blair's film also has the ability to escalate into stone-cold blood and violence, but it's never quite the gore-fest of, say, Green Room. Blair keeps the violence grounded, so that when it blows up, it's all the more effective.

In I Don't Feel at Home in This World Anymore, our ordinary protagonist is a lonely nurse played by Melanie Lynskey; who, after she is robbed of her laptop, medication, and grandmother's china, decides to track down the thieves, finding no help from the police. This character more or less embodies the film's central theme exhibited in its title, as she is fed up with contemporary society and the behavior of the people in it. She's quite stubbornly traditional in many facets, to the point that she even has an old lady name (Ruth! Ugh.). However, as Ruth becomes more immersed into her situation, she also becomes more and more like the people she despises. It's quite a fascinating character arc at the center of what could otherwise be seen, on the surface, as just another average thriller. Lynskey plays the character very well in a comedically awkward way that is clearly derivative yet simultaneously feels unique.

Also along for the journey is Ruth's idiosyncratic neighbor, Tony, who lives in a similar isolated existence as Ruth. Tony is an absolutely hilarious comic relief, portrayed to perfection by Elijah Wood, whose awkward nature perfectly complements Lynskey. Wood's delivery of Blair's witty dialogue often leads to uproarious results, i.e. "That's how hard I threw it." (funny in context, I promise) Somewhat predictability, Tony and Ruth begin to bond and grow close to each other during their experiences (despite not starting off on the best terms), and though it sounds like it could be a cheap ploy, this focal relationship actually becomes quite endearing because of the uniqueness of the characters and the great lead performances.

Sure, even after all of that, it could be easy to dismiss I Don't Feel at Home in This World Anymore as just another thriller, but there's some fascinating substance in here that makes it worth another look. This film really plays around with the theme of the apparent stupidity of the modern world, and does so well. The incompetence and frustration of its characters spread beyond the leads, to the supporting cop character and the antagonists. (Side note: The film's weakest aspect is definitely its one-dimensional villain characters, and it definitely loses some of its appeal when it focuses on them) Blair's dialogue also captures, in a rather authentic way, the nuances of the present, from the bad humor to the affinity for technology. Combined together with a distinctively quirky style, memorable characters, and a cool soundtrack, Blair's debut becomes a very special, very funny film. He and Saulnier have now made three of the best thrillers of the decade, and I can't wait to see what these guys do next.