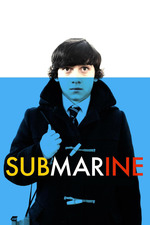 "This is the part where you leave him and come with me."

I was fully prepared to hate this movie starting with the first scene. The text on the first screen screamed pretentious, as if they were saying, 'we're going to be up our own arses with this movie but it's okay because we're lamp shading it humorously.' The movie was ugly, the characters were unlikable – – especially Jordana – – and no one really came across as sympathetic.

But two scenes really turned me around. The first one was when Oliver's dad makes him a mix tape to help him through his first relationship. One side of the tape is happy songs, and the other side is break up songs. The scene struck me as so bizarre and yet so lovely and touching that I couldn't help but begin to like these characters. The second scene is the Christmas dinner at Jordana's house. The way her father talks about her and her relationship with Oliver goes a massive distance towards humanizing this character. And of course the awkward emotional scene with the family going off into the background sharing a private moment while Oliver sits at the table alone feeling weird comes across as so believable that I couldn't help but begin to care about this girl.

From that point on – which takes us to the halfway mark or so in the film – I had become invested in what was happening with these people. By the time we come to that gorgeous final scene, I have come to understand that the whole story was a journey of Oliver learning to pull his head out of his own butt and recognize the world all around him.

Speaking of that final scene: it's the only scene that's really lit with lovely natural light. Everything else is so gray and overcast and dark that it completely matches Oliver's mindset (and also Jordana's).

We know that this is a British film and not an American film because the kids are not particularly attractive, and their homes are ugly and old-looking. Oh, I know that it's set in the 1980s, but they still would've been a lot prettier – both the boys and the girls – in an American version of the same story.

I'm not quite as over the moon about this film as some of the reviews I've seen on this site. But I think it's a terrific little movie that rewards patience. And in the end it tells a compelling story.

Well done, Maurice Moss! I never knew you had it in you…