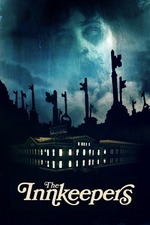 Just got the bluray in the mail yesterday and watched again with the second commentary (Ti West, Sara Paxton, Pat Healy). They're pretty entertaining and informative, though they sometimes go a bit MST3k on themselves.

Tidbit: The hotel is where they stayed while making House of the Devil a few years before. Its famous hauntings and creepy atmosphere inspired West to write this script, and he was pleased they got permission to come back and film there.

Tidbit 2: They had a hard time casting Leanne, the older actress/psychic. Apparently, older actresses don't have a lot of sense of humor about their situation and wanted him to change the character. He signed Kelly McGillis via skype, just days before shooting began. And she almost couldn't come back from London in time because of the Iceland volcanoes messing up flight schedules.

Tidbit 3: Sara Paxton's personality is just as cute and lovable as you'd hope.

Tidbit 4: They point out that there's a very faint image of a ghost in the final shot, just before the door slams. I watched it half a dozen times, as well as looking for stills online. I think I have seen it now, but I am not 100% certain. I may have to take the BR to my parents' house to look at it on their 50" screen.

Tidbit 5: Ti West's enthusiasm about how they used sound in the film is infectious.

Tidbit 6: They don't mention Top Gun once while McGillis is on screen - or any other time.