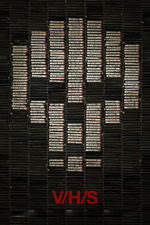 1. I liked the Ti West segment. Take that, haters!

2. I liked all the segments, really, apart from the messy and annoying framing story. That one had creepy moments, but I was hoping those guys would all die much sooner than they did. Some of the most unlikable characters ever.

3. Some great actress casting, especially Lily the Succubus (Hannah Fierman). That chick had some freaky eyes even before turning into a monster. Also, Helen Rogers as Emily looks adorable, and I thought she was very good. I will have to see what other work she's done. (Poor, sweet Emily, going through this insanity.)

4. I was wondering if the dudes in the attic were actually working to banish a demon through killing the girl. It looks like I was right. The effects get a little cheesy in that one towards the end, but the house was well creepy.

5. I haven't seen it yet, but I have to wonder if the makers of Unfriended weren't a bit inspired by the video chat story.

6. Finally, some folks have challenged the idea of putting this material on tape, especially the video chat segment. But the best explanation I have seen is that collectors/traders transfer their material to analog so it can't be traced online. Works for me. It also fits with V/H/S 2, which contains a direct reference to an underground community of collectors - no doubt to answer this very question.

7. I noted how, unlikable as they initially seemed, the bros don't appear to be ready to date-rape the passed-out girl. They make a tasteless joke, but it doesn't seem like they're going to do it. So that helps them be a little less hateful.