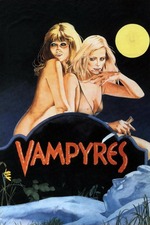 On the ‘70s Euro horror scale, this has more substance than Franco, less sociological subtext than Daughters of Darkness, and less assured dreamlike atmosphere than Rollin. But it’s still pretty rich and intoxicating stuff, with an effective style and character all its own. And lots of blood and tits. Gotta cover the bases.

Hammer was on its last legs by ‘74, and Vampyres is basically occasional Hammer distributor Rank films independently making a Hammer movie without Hammer. A sort of spiritual follow-up to their string of vamp flicks with lesbian undertones, Vampyres ups the sexytimes considerably, and at times feels like early softcore. And that’s not a bad thing: our leads’ sexual appetites define them as much as anything, and the movie uses all that skin to draw parallels between the ways humans connect in general. Seriously. It’s lewd and gratuitous, yet that feels like a natural byproduct of the plot.

Such as it is. The film is more a mood piece than an explicit narrative. Aside from some glimpses of basic vampire iconography like bats and covered mirrors, it’s never confirmed that Fran and Miriam are actually vampires. No fangs, no powers. Just women who feel the need to drink blood, and a prologue that seems to show their murder by the gun-wielding hand of an unseen invader. Their crime? Ya got me. We only see them shot while in the throes of some fairly energetic lovemaking. Were they killed for being lesbians, and are now cursed to consume the blood of strange men if they wish to stay together? If so, that’s a pretty bold premise for ‘74.

Director Larraz shows a lot of tonal similarities with his contemporary Rollin. But while Rollin dealt in surrealism, Larraz leans more towards a pure ambiguity. He’s not really leaving things open to interpretation or using the imagery to pull the rug out from under the audience as a surrealist would. It’s more like he just avoids lore and exposition as it would get in the way of the story’s central conflicts, the only parts that seem to concern him. It’s horror at its most primal and stripped-down.

Even the title seems to convey this: “Vampyres” suggests “The Vampyre,” the influential 1814 short story that predates most vampire lore and focuses almost entirely on the seductive, alluring and evil aspects of the otherwise very human creature. Our hot vamps in Vampyres seem to be a deliberate reversal of the archetypes set up in that classic story - a reversal in gender, sexuality, drive, everything. This may be the underlying theme of every sexy and/or lesbian vampire flick of the era, but despite its ambiguity, few films feel as much like a straightforward interpretation of this theme than Vampyres. “Nothing's too good to be true, it's just that life is too short,” Miriam laments flirtatiously in her cursed state. “The murderer always returns to the scene of his crime” is a line just sort of tossed out at the end, yet it hangs over the whole movie. For a movie with so little plot, there’s a lot going on, especially in the last 5 minutes.

But you can ignore all of this and just take in the bloodletting, the beautifully Gothic country setting, and the truly sexy Marianne Morris and Anulka. Damn entertaining post-Hammer horror.