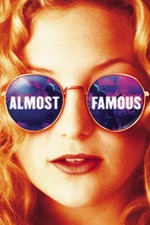 “Rockstars have kidnapped my son!”

An enjoyable and fun music drama, about a young journalist finding himself on a journey with an up and coming 70s rock band. I had high expectations of this going in, and watched the directors cut of , which maybe is reflected in my score, it was enjoyable but felt too long for me and unfocused in parts.

A highlight is the great soundtrack, the music of the 70s really adding to the story itself. I really like the idea of having a coming of age movie set during this period, with bands and musicians as the backdrop. There’s a cool idea of ‘never make friends with the people you write about’ aspect that does get some attention, but feels like it’s dealt with rather quickly at the end. I think maybe exploring more of this world of music journalism would have made the film more of an interesting watch, rather than just skimming the outside like it does.

There is some good humour, and drama, but I was never truly invested in the emotional side of the story. At time’s it’s just too unfocused, losing track of certain story elements that work better than others. It’s a shame that some of Williams tale was pushed to the side for some of the smaller, less interesting characters. There’s just some characters who I liked that didn’t get enough screentime, pushed to the side for B plots that maybe didn’t work as well for me. It took away from William’s story, which I found the most interesting.

The cast are all great. I really liked all the band members, it really felt like you were watching a family travelling on the road, the love and the bickering together making them feel real. Kate Hudson as Penny Lane is great too, mysterious but also fragile, being used by the band and never truly being appreciated by the people she loves the most. I wish they’d looked a little more into her character, and her relationship with William. There’s nice smaller appearances from Phillip Seymour Hoffman and Frances Mcdormand, who I’d like to have seen more of.

I totally see why so many people love and adore this movie, there was just something missing for me. It’s a movie I want to revisit, and probably watch the shorter theatrical version, maybe it creates a more compelling and tighter plot for its characters.