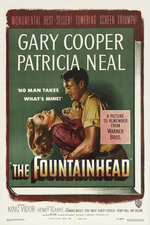 News Alert: Zack Snyder's Next Film Will be an Adaptation of The Fountainhead

Being somewhat bored with Letterboxd, I've decided to spice things up by responding to this latest piece of movie news. The fact that my least-favorite director will be adapting one of my favorite books is too much for me to bear. Please permit me this rant.

Zack Snyder is one of the most incompetent directors working today. For those unacquainted with Uwe Boll, his name has become synonymous with action-packed hackwork. Known for his comic book adaptations, Snyder has given us such gems as Man of Steel, Batman V Superman, and Sucker Punch. Outside of a very small concentration of die-hard DC Comics fans, his work is generally ill-regarded.

Stylistically, Snyder is characterized by his commitment to a dark aesthetic, a trait he borrowed from Christopher Nolan. His films are visually unpleasant— he toys with saturation and contrast until his movies resemble something akin to a muddy rain puddle. Thematically, he demonstrates very little understanding of the material he adapts. This is perhaps best exemplified by an interview in which he suggests that Batman “could get raped in prison” in one of his movies. Though this disturbing idea was never brought to fruition, a scene in which Batman bludgeons Superman over the head with a sink did make the final cut.

I personally don’t care about superheroes or their movies. But Snyder did adapt one worthy superhero saga ten years ago— Watchmen, a graphic novel about the innate pathology of vigilantes. The “heroes” in this novel are truly monstrous in various ways, but childish Snyder saw nothing more than another group of badasses in spandex. His Watchmen adaptation, like all his other films, is ultimately shallow, derivative, and dull.

And this is where I take issue with Zack Snyder. There are a lot of bad directors out there (Michael Bay) and a lot of unoriginal ones (Freidberg and Seltzer), but none who so deliberately and consistently misunderstand source material as Zack Snyder does. The integrity of the original creator’s intent is consistently lost on him— all that matters is how best to shoehorn another slow-motion action sequence into the film. If his sloppily constructed characters and repugnant cinematography were confined solely to his own projects, I wouldn’t mind so much. But he insists on adapting (and thus perverting) the works of others, because the scope of his own creativity begins and ends with scantily clad women kicking ass.

Which brings me to The Fountainhead.

Love it or hate it, The Fountainhead is an ode to originality, creativity, and independent thought. Its main character, Howard Roark, is a true creator who refuses to build in the style of classical architecture. His buildings are all unique, with no false cornices or pillars to give the artificial impression of age. He refuses to merely adapt the innovations of his predecessors for the modern age— instead, he sets about creating an entirely new aesthetic that is his and his alone.

What Zack Snyder sees in Howard Roark, I have no idea. Creatively, the two are matter and antimatter. Whereas one is an ode to originality, the other has made a career out of standing on the shoulders of the real creators. Snyder’s only original film, Sucker Punch, is arguably his worst movie yet. It’s stunning that he doesn’t see the irony here.

The only explanation I can think of for Snyder’s infatuation with The Fountainhead is this— Roark, like Snyder, receives critical backlash to his work, and earns himself millions of detractors. In Roark’s case, it is because the unthinking masses have no opinions of their own, and rely on a talentless critic to craft their beliefs for them. In Snyder’s case, it is because his films are vapid, emotionless garbage. The novel’s relentless mocking of critics and their followers probably appeals quite a bit to Snyder, who has suffered repeated humiliations at the hands of Rotten Tomatoes and its critical cabal. And yes, a number of people probably look at the scores his films receive (typically in the high 20s) and immediately write them off. Whether those people are statistically significant is a matter of some debate.

If I were to compare Zack Snyder to a Fountainhead character, it would be Peter Keating. This anti-Roark is completely devoid of original thought, stealing Roark’s works and claiming the credit as his own. His architecture is derivative and uninspiring, and like Snyder, he earns adoration from fans who know next to nothing about art. Perhaps Snyder recognizes this, and has chosen to adapt The Fountainhead as a sort of atonement for his inability to live up to the ideal of Howard Roark. But in doing so, he ironically chooses to once again forego creativity in favor of appropriating the work of another, better creator.