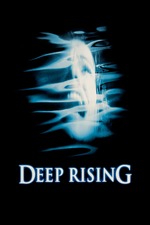 “Can you just get asthma or do you have to born with it?”

I deeply miss the sincere genre mashups without winking and smirking at the audience about how ridiculous things get. Stephen Sommers isn’t like some master filmmaker but he’s a lot like Joel Schumacher (rip king) in that he clearly loves entertaining people. This is one reliable smorgasbord of obviously far better films, but it’s one that takes exciting elements and makes them all work. It’s a nasty little swashbuckling monster movie that needed about 10-20 million more dollars for some of the creature and ship VFX (wow, is that ship unconvincing). There’s a bit where Treat Williams and Wes Studi are at each other’s throats, clearly about to throw down right up until shit hits the fan and they toss each other looks, load their guns and get a glamorous hero shot. I was in heaven. I wish the entire movie was about a meet cute for their bromance. But the rest of the chemistry with the principal cast was a *ahem* Treat to watch too. Williams, Studi, Famke Janssen and Kevin J. O’Connor all MVPs. Shout out to Jerry Goldsmith for his continued track record of impeccable movie scores and Rob Bottin’s gross out creature stuff.

Not as good as The Last Boy Scout. Will absolutely enter it into my monster movie rotation.