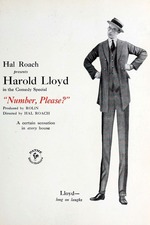 A few years after Arbuckle's Coney Island, Lloyd starred in his own slapstick fairground short. It has a similar issue to Arbuckle's in that the location becomes the real star and when the action moves away from the fun of the fair, the short becomes less interesting.

In Number, Please? Lloyd plays a young man trying to win back the affections of his ex-girlfriend who has arrived at the amusement park with her new boyfriend. The first half uses the setting to great effect with some great comedy born out of the roller coaster, side shows and in particular the carousel.

The second half sees Lloyd and the new boyfriend race to get permission to take the girl on a balloon ride. This leads to a protracted joke about Lloyd trying to get rid of a purse whilst avoiding some seriously slow acting police officers. The whole segment which although contains some good laughs and neat ideas, does feel a bit protracted. The outcome though is quite surprising.

Overall it's a very good short, a lot of fun and Lloyd is an incredibly likeable lead.