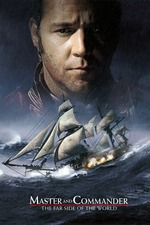 This film oozes skill and craftsmanship from every cinematic pore.

Adapted from a couple of novels from Patrick O'Brian's 20 volume Aubrey-Maturin series, it manages to capture the sense of adventure and historical allusion really well. I have read a fair few of these novels and they all share a common trait and that is deep characterization, historical accuracy and spectacle.

The latter of those is often easily transferred to film, the first two not so much. Leave it to Weir, who averages about 1 film every two years, to not only capture the characters but also submerge us in a richly detailed historical setting that feels refreshingly authentic. Granted he perhaps focusses a bit too much on the characters which does a small disservice to the pacing of the film, but it also adds a nice, rich nuance that is often missed in films like these.

I am not a fan of Crowe, but this is a role he plays best. Commanding, manly and determined, he displays a natural authority which makes him very convincing as a leader. Paul Bettany offers up a nice counterbalance with his ship's surgeon and the complex friendship they have thus becomes believable, a key aspect to this film, much like it was in the novels.

There is, naturally, a lot of action as well. The naval battles are absolutely stunning and Weir proves that he has a great sense of dimension and treats his audiences to action that is actually easy to follow without losing any tension.

But the true strength of the film lies in how life aboard the Surprise is portrayed. It is scrumptiously rich in detail, never shying away from showing the small day to day things and also revealing some intriguing rules and rites in a place that in itself is a unique society.

For me this is one of the best, modern examples of a classic adventure film, with its heart in the right place and its brain switched on.