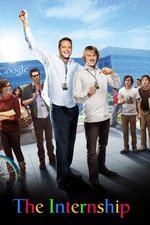 Most Tuesday evenings I go to my local movie theater for the Sneak Preview. There we are shown a film that hasn't premièred yet in the Netherlands and we never know in advance which film we will get. This was today's sneak preview. I list them all here.

As you can read above I haven't given up on my pledge made here. The universe forced this upon me.

And it fucking hates my guts.

I'm sorry but this poor excuse for a film pissed me off so much I nearly deleted all my Google related software and was ready to take a vow of never using Google again. Then I tried to find something using Bing and I reconsidered.

It did not, however, lessen my hatred for this abhorrent piece of crap people actually dare market as a comedy.

This is not a film, this is one of the most elaborate product placements you'll ever see. What is really unbelievable is that there were actually people over at Google who thought it was a good idea to have their product feature in a film written by Vince Vaughn. Vince fuckin' Vaughn. Didn't they Google his name? That certainly would have avoided this disaster.

Google here is represented as company which has a work environment that is reminiscent of Mr. Jackson's Neverland. It has slides, free food and whatnot. And this building is filled with noble people who want to make the world a better place and who use words like Googliness and Noogles. This felt more like a dangerous cult with some weird brainwashing rite of passage called The Internship.

The most amazing achievement this 'comedy' accomplishes is that it accurately transfers the Google prediction algorithm to the script. You know how Google always tries to finish your sentences? Well, this total immersive experience allows you to actually be the Google search engine! How cool is that?! From the moment it starts you know how it will end, whenever characters are introduced you know what will happen to them. Honestly, you'll feel like God. Google is that good.

The 'script' of this film was co-written by Vaughn. And I'm sure that he spent hours using Google to find every single cliche he could to make sure he wouldn't miss any here. I'll just list a couple here. Don't worry, they aren't spoilers, you know all this already.
- Owen Wilson gets the girl - check
- The Geek gets the girl - check
- Vaughn gets to shout all his lines - check
- They all learn valuable life lessons, become better people, win against all odds and are just pure bundles of Googliness? - check
- The bad guy is really, really, really, really bad just to make extra super sure we hate him? - check
- It has every single Nerd stereotype and geek reference imaginable? - check
- There are no jokes in it whatsoever? - check

This is the worst viral marketing ever, one of the worst comedies I've ever seen and further proof that making money is more important than actually having an original idea.