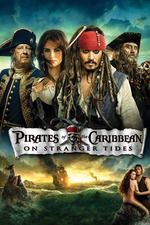 Pirates of the Caribbean: On Stranger Tides

It took me three days to finally finish this film. Was it because of its poor quality or just my continuously deteriorating attention span? Or both?

Anyway, this was a pretty decent film but still not that impactful compared to the first three. The acting, cinematography, score, and production were still great. The action scenes did not convince me despite giving us three crews fighting each other for some water. Also, Barbossa had one hell of a journey and I couldn't help but admire that he somehow always wins in the end. I already miss Will and Elizabeth but Angelica's boobs are somehow a perfect replacement, so I'll go with it. As I'm writing this review, I just realized that I actually wasn't able to take note of some striking line/s to make this complete. Perhaps because the script wasn't that good to begin with?

Pirates of the Caribbean: At World's End