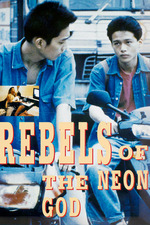 Aimless, pondering, meandering and droll, yet somehow enormously engrossing, Tsai Ming-liang's Rebels of the Neon God is a blunt, riveting exploration of banal youth culture and the vapid, meaningless pursuit of a purpose in a world which is so cyclical and static. The moment a character pauses to observe a poster of James Dean in Rebel Without a Cause says it all, these are individuals living in the shadow of something greater, in between the forms of a chance, stuck in the night time obscurity and anonymity, seeking a meaning that is not there.

One of the film's greatest strengths is how flawlessly edited it is, whilst it may operate at a hypnotic, low-key pace, the constant contrasts of the two parallel stories of Hsiao-Kang and Ah Tze create an absorbing tale that never once loosens its grip. Their lives snake around one another, their fingers brushing against each other for an agonising second before darting off again, but forever looming over one another. And then when they finally meet, Tsai pushes the camera right in on their encounter, only for a few harsh words to be exchanged and the shot to leave Hsiao-Kang in the dust looking on, tossed back into his usual routine. It's an extraordinarily powerful visual. And beneath this masterfully told story is the ominous, brooding score, simple and catchy yet also unsettling, a reminder that as easy as this passage of life may be to climb on board, it won't be a pleasant experience.

Whilst the gorgeous, intoxicating neon city setting of Taipei has been catnip for directors like of Hou Hsiao-hsien, Tsai somehow manages to drain it of it visual lustre, dimming the lights, accentuating the shadows, permanently casting the place in the dark of night and drenching it in almost non-stop rain. This hopeful and bright utopia becomes a breeding ground of disappointment and shortcomings, gorgeous yet depressing. The spectre of Taipei haunts these characters just as much as they haunt one another, Hsiao-Kang cannot forgive Ah Tze, and Ah Tze will not leave Hsiao-Kang's mind, the two are tied together.

Rebels of the Neon God is grimy, damp, dark and bleak, a quietly delivered tale of shortcomings and failures, all wrapped up in 100 masterful minutes of astonishing filmmaking.