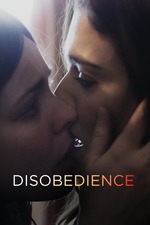 As a queer romance drama, Disobedience is not exactly breaking new ground in the same way that recent successes such as Carol and Moonlight have. However, it is a signal for something just as important: the eventual point in time when we can just have movies like this, with characters like this, and it won't be as much of a big deal every time we get one. Sebastian Lelio's story of two female Jewish Orthodox childhood friends turned conflicted lovers certainly isn't lacking in fresh ideas, but it also doesn't feel like a massive event. It feels like a movie about three people and their lives.

Yes, three. Between Rachel Weisz and Rachel McAdams (both stellar here and fully committed to the material) is Alessandro Nivola, another friend and lover who is struggling just as much as the two women in his life, and delivers just as good of a performance. The obvious term to use to describe the story is a love triangle, but this isn't really that: it's a story of cultural boundaries, personal choices, internalized obligations, and yes, spitting in each other's mouths. The much-discussed central love scene is a spectacle, sure, but for the emotions on display as much as the physicality, and even then it doesn't match that immaculate shot that shows these lost souls willing not just to wholeheartedly forgive, but to wholeheartedly accept.

He should have ended on that shot.

The Transformers: The Movie