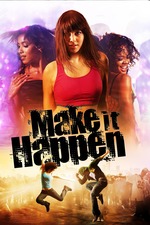 A movie can survive many flaws, but a movie with a poor main character is guaranteed to fall apart. Without a connection to the protagonist, the audience will leave the movie dissatisfied every time.

Make It Happen has the opposite problem. The protagonist, Lauryn Kirk, played by Mary Elizabeth Winstead, is the only thing about the film that works, and it's everything else that's the issue. Granted, Lauryn isn't actually all that interesting on her own merits, being a fairly typical dance film protagonist with an immediately recognizable arc that never deviates from the well known path. However, MEW tries so hard to infuse copious amounts of charm and energy into her performance that the character works anyway. She clearly knows she's working with uninspired material, and MEW's unwavering attempt to lead this thing regardless is more engaging than the film itself.

Unfortunately, no one else is helping her. The script for this movie is as generic as they come, crippled by constant clichés that make it extremely difficult to get invested in anything going on. Within two minutes, the entire trajectory of the film can be predicted with startling accuracy. The other actors don't even bother to try with the dull script, leaving MEW floundering by herself. The direction by Darren Grant proves that skills developed in music video directing do not necessarily translate to film directing, because nothing outside of the dance scenes has any sense of visual flair. Worst of all, the film is simply boring, which really shouldn't have been the case with a lead performer as dynamic as MEW.

There's really only one reason to watch Make It Happen, and that's for MEW's dance scenes. Luckily for you, you can find all of them pretty easily in gif form online.