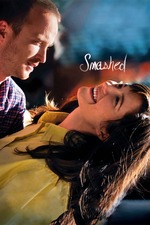 Films about recovery from alcoholism or other types of addiction have to both tell a compelling narrative and avoid coming across as preachy public service announcements. Luckily, Smashed accomplishes both of these things.

The film's greatest asset is main star Mary Elizabeth Winstead, who delivers the best performance of her career. Helped by an excellent script, the way that her performance brings life to the story of alcoholic elementary teacher Kate Hannah is vibrant, charismatic and emotionally engaging. The film's best decision in terms of character construction is to avoid showing Kate as malicious or spiteful even in her darkest moments. She's flawed, but also clearly good-hearted the entire time, and the consistency of character even when she's intoxicated keeps Kate endearing and prevents the film from feeling heavy-handed. The fact that MEW did not earn an Academy Award nomination for this role is a crime, pure and simple.

MEW is surrounded by some stellar supporting performers, including Aaron Paul, Octavia Spencer and Nick Offerman. MEW and Paul showcase great chemistry as a married couple with a dynamic that is both fun-loving and has built-in tension. Director James Ponsoldt's penchant for emotional truth shines through with both the script and the visuals, and each scene moves along at a perfectly timed rate. Everything culminates in a final scene that is satisfying and devastating at the same time, leaving the story in a difficult and nebulous area that resembles such situations in real life.