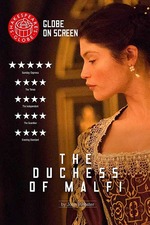 One of the few plays of Shakespeare's time to not be completely overshadowed by the great Bard over the centuries, John Webster's The Duchess of Malfi has endured as one of the great macabre tragedies of the Jacobean period. Even though it was written four hundred years ago, Webster's play can still be very effective, as shown by this latest interpretation.

One of the oldest and greatest female roles of the English literary canon, the Duchess of Malfi is a complicated character who has to balance regality, playfulness, caring, contempt, intelligence and determination, and Gemma Arterton proves her dramatic prowess yet again by delivering a knockout performance in the title role. Arterton's Duchess manages to maintain a sense of stoic dignity even in her more vulnerable and humourous moments, showing her dedication to the characterization. Her death scene is particularly moving, with Arterton's commanding presence and confident delivery taking over the stage.

Arterton is contrasted with a similarly strong performance from David Dawson as her villainous twin brother, Ferdinand. Overzealous, violent and prone to fits of incestuous rage, Dawson's Ferdinand becomes a psychotic monster without stepping too far into cartoonish territory. The rest of the cast fill out their roles well enough, and the elaborate, completely candlelit staging makes for an intriguing visual design even if it is a bit too claustrophobic. As always, the scenes between the Duchess' death and the final curtain drag on too long, but that is the nature of the play at hand.

Elegant and gripping, the 2014 version of The Duchess of Malfi is a powerful production of Webster's finest achievement.