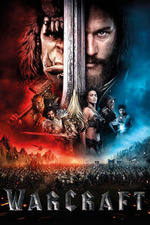 Warcraft is an incredibly ambitious film. It tries to introduce a massive world, tons of lore and a wide cast of characters to an entirely new audience, all while clearly being designed to eclipse all previous attempts at video game films. Does it succeed in its lofty ambitions? That's actually not an easy question to answer.

The adoration that director Duncan Jones has for the source material is evident within the first few minutes of the film. From the designs of the creatures, locations, weapons, spells and the world at large, dozens of aspects of Warcraft lore have been lovingly translated to the screen. The film has a very distinct visual aesthetic, making it feel fresh compared to other films but faithful compared to the games. As well, the numerous characters are brought to life by a talented cast, and the performances all around are quite good. The standouts are Toby Kebbell as Durotan, Travis Fimmel as Lothar and Ben Foster as Medivh, but pretty much everyone holds their own, which is surprising given just how many characters are running around.

However, Warcraft's ambition is also responsible for its problems. While the plot is actually fairly easy to follow, the sheer amount of exposition that explains the lore can become agonizing at times. As well, the pacing of scenes in the first half is stilted, making the story seem poorly structured. The second half, which is much lighter on exposition and allows the characters room to breathe, fares far better. The action scenes are exciting, and the visual effects for the most part are very well done. Sadly, all of the visuals and action serve a story that works functionally but never actually reaches the emotional resonance that it wants to.

While nowhere near perfect, Warcraft is the first video game movie to actually feel like a legitimate film. Whether or not that makes it a success is up to you.